The Girl Who Talked to Dolphins (BBC)


The Girl Who Talked To Dolphins by limukohou

"If there is a cartographer of altered states of consciousness—of the highways and byways of the inner trip—it is John Lilly, a rare combination of scientist and mystic." —Psychology Today


This documentary examines the work of Dr. John Lilly and his team in the 1960s when he was working on interspecies communication between humans and dolphins. The film contains extensive audio and film recordings from John Lilly's early work. The documentary tells the story of the most extraordinary experiment in the history of animal science. In the 1960s John Lilly flooded a house. He then invited a young woman to live there full-time with a dolphin. Their intention was to teach the dolphin to speak English. What happened next would change all their lives. For the first time those involved in the experiment reveal the secrets of the Dolphin House.

Between 1959 and 1968 Lilly wagered and lost his mainstream scientific career largely over this audacious, ultimately inconclusive bid to establish and document for scientific validation “communication with a nonhuman mind.” In that effort, however, he mobilized the best available tools, a cutting-edge array of cybernetic concepts. He leaned heavily on the information theory bound up with first-order cybernetics and operated with heuristic computational metaphors alongside the actual computers of his era. As I will elicit through some close readings of his texts, in that process Lilly also homed in on crucial epistemological renovations with a constructivist redescription of cognition that may have influenced and motivated his colleague Heinz von Foerster’s more renowned formulations, arriving in the early 1970s, of a second-order cybernetics- (Clarke). 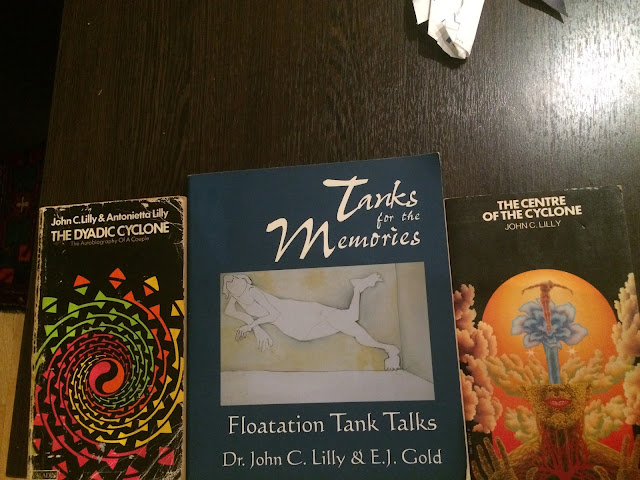 John Lilly went on to write numerous books about inter and intra personal communication and awareness. His work with floatation tanks, LSD and telepathy are well known in both the scientific and in the counter culture communities. His essay, Programming and Metaprogramming in the Human Biocomputer is a classic for anyone studying the nature of consciousness.
Posted by James Barrett at 10:29 PM No comments: Links to this post

Dr. Robin Carhart-Harris - Psilocybin and the Psychedelic State from Matt Faw on Vimeo.

New research on Psilocybin and how psychedelics could be used in therapy to help with depression, addiction, and other problems of rigid thought patterns. Interview shot as part of forthcoming 3D Consciousness documentary.

Filmmaker: Matt Faw
Backgrounds videos are downloaded from YouTube, copyright of their prospective creators. Footage used for previsualization only and will be replaced.


New research using psychedelic drugs to understand the brain could lead to new treatments for mental disorders such as depression. Dr Robin Carhart-Harris will describe his research with these unusual compounds, which includes the first ever functional brain imaging studies with LSD and magic mushrooms. This talk was recorded at Imperial Festival 2015

Website for the research: http://psychedelicscience.org.uk/
Posted by James Barrett at 7:43 AM No comments: Links to this post


"Stone," is an Australian biker picture that was a huge hit in its day back in 1974 and has since become an enduring cult classic. Among the things we learn is that "Stone" star/co-writer/director/producer Sandy Harbutt was a really down-to-earth and approachable guy on the set of the film (alas, Harbutt never made another feature in the wake of "Stone" 's monumental success), bikers who are Vietnam war veterans find the depiction of their lifestyle in the movie to be honest and accurate, a real-life biker gang played the rival club the Black Hawks (these guys were paid with beer for their contribution to the flick!), lead actor Ken Shorter was an ex-cop who designed his own clothes, 400 bikers showed up to participate as extras in the famous highway funeral procession sequence, actor Vincent Gil did double duty as a grip, the movie received largely poor reviews from critics, but still proved to be a massive box office smash, a biker club called the Stone Social Club was formed in tribute to the film, and Harbutt and several other "Stone" folks stormed the Cannes Film Festival in 1980 in order to secure international distribution for the picture. Of course, such "Stone" cast and crew members as Hugh Keays-Byrne, Rebecca Gilling, editor Ian Barry, Roger Ward, Helen Morse, cinematographer Graham Lind, and Bindi Williams are all interviewed as well.

Posted by James Barrett at 5:15 PM No comments: Links to this post