HRC President Chad Griffin presents Director and Producer Lana Wachowski with the HRC Visibility Award at the 2012 HRC San Francisco gala. Lana speaks of her journey and why now is the most important time to get involved in the fight for LGBT equality.

"Anonymity allows you access to civic space, to a form of participation in public life, to an egalitarian invisibility"

"Knowledge had the materiality, not unlike the materiality of a ladder, that could be used to gain access to places and worlds that were previously unimaginable".

Posted by James Barrett at 11:43 PM No comments:

During the shooting of Andrei Tarkovsky's last film Offret, cameraman Arne Carlsson taped around 50 hours of behind the scenes footage. Editor Michal Leszczylowski took the material and added scenes of previous interviews and interesting statements from the script of Offret and from Tarkovsky's book 'Sculpting in Time'. The result is a documentary that shows the way Tarkovksy worked: carefully building each scene. Shows why he did the things he did: his vision on film. And shows the emotion of the man Tarkovsky: his great disappointment when the camera breaks while shooting the house going up in flames.
Posted by James Barrett at 5:03 PM No comments:

Tracklist: The drudgery of the recording sessions for "Jennifer's Veil" and "Swampland" from the "Mutiny!" EP. 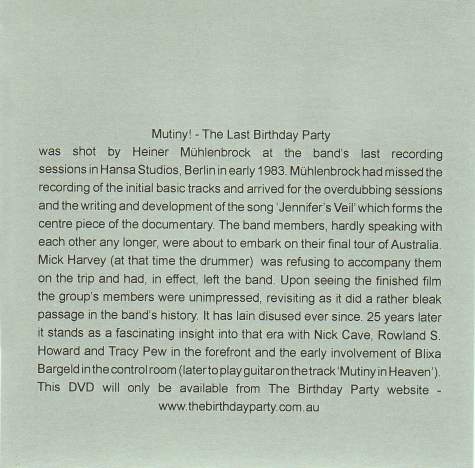 Posted by James Barrett at 11:03 PM No comments:

Richard Linklater‘s low-key debut Slacker. He constructed the 1991 film as a series of set pieces — some irreverent, some meandering, and some bizarre, but most all of them with stealthily universal resonance — taking place across the college town of Austin, Texas. Douglas Coupland having coined the term “Generation X” with his eponymous novel less than four months before, the North American zeitgeist had come to take serious, if smirking, notice of all these slouchy twenty-somethings who seemed to turn up without warning, spouting endless streams of ideas, theories, wisecracks, and elaborate plans, yet drained of anything recognizable as ambition. These slackers, as we now call them without hesitation, make up the dramatis personæ of Slacker. You can see them in their own peculiar type of action by watching the picture free online.

Posted by James Barrett at 6:33 AM No comments:

The Great Dandy Marc Bolan made a TV series.

Sing Me A Song - T.Rex
All Around The World I've Been Looking - The Jam
I Love To Boogie - T.Rex
Cool Wind From The North - Stephanie
No Russians In Russia - Radio Stars
Heart Throb's Dance (You Made Me Believe In Magic / DCR)
Celebrate Summer - T.Rex
You Have What It Takes - Showaddywaddy
Jeepster - T.Rex
Posted by James Barrett at 10:53 PM No comments: