The Gleaners and I (French: Les glaneurs et la glaneuse, "The gleaners and the female gleaner") is a French documentary by Agnès Varda that features various kinds of gleaning. It was entered into competition at the 2000 Cannes Film Festival ("Official Selection 2000"), and later went on to win awards around the world.

Agnès Varda, Grande Dame of the French New Wave, has made a non-fiction film-a self-described "wandering-road documentary." Beginning with the famous Jean-François Millet painting of women gathering wheat left over from a harvest, she focuses her ever-seeking eye on gleaners: those who scour already-reaped fields for the odd potato or turnip. Her investigation leads us from forgotten corners of the French countryside to off-hours at the green markets of Paris, following those who insist on finding a use for that which society has cast off, whether out of necessity or activism. Varda's own ruminations on her life as a filmmaker (a gleaner of sorts) give her a connection to her subjects that creates a touching human portrait that the L.A. Weekly deemed "a protest film that's part social critique, part travelogue, but always an unsentimental celebration of human resilience."

The film tracks a series of gleaners as they hunt for food, knicknacks and personal connection. Varda travels French countryside of America and city to find and film not only field gleaners, but also urban gleaners and those connected to gleaners, including a wealthy restaurant owner whose ancestors were gleaners. The film spends time capturing the many aspects of gleaning and the many people who glean to survive. One such person is the teacher named Alain, an urban gleaner with a master's degree who teaches French to immigrants. Varda's other subjects include artists who incorporate recycled materials into their work, symbols she discovers during her filming (including a clock without hands and a heart-shaped potato), and the French law regarding gleaning. Varda also spends time with Louis Pons, who explains how junk is a "cluster of possibilities". This film has an unexpected brief interview with the psychoanalyst Jean Laplanche.
Posted by James Barrett at 11:02 PM No comments: Links to this post

The Land Where the Blues Began 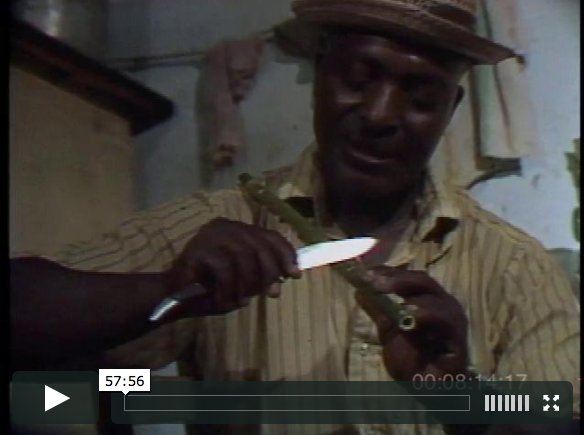 The Land Where the Blues Began is one of five films made from footage that Alan Lomax shot between 1978 and 1985 for the PBS American Patchwork series (1991). A self-described "song-hunter," Alan Lomax traveled the Mississippi Delta in the 1930s and 40s, at first with his father John Lomax, later in the company sometimes of black folklorists like John W. Work III, armed with primitive recording equipment and a keen love of the Delta's music heritage. Crisscrossing the towns and hamlets, jook joints and dance halls, prisons and churches, Lomax recorded such greats as Leadbelly, Fred McDowell, and Muddy Waters, all of whom made their debut recordings with him.
In the late 1970s Lomax returned with filmmaker John Bishop and black folklorist Worth Long to make the film The Land Where the Blues Began. Shot on video tape, the film is narrated by Lomax and includes remarkable performances and stories by Johnny Brooks, Walter Brown, Bill Gordon, James Hall, William S. Hart, Beatrice and Clyde Maxwell, Jack Owens, Wilbert Puckett, J. T. Tucker, Reverend Caesar Smith, Bud Spires, Belton Sutherland, and Othar Turner The Association for Cultural Equity’s Alan Lomax Archive channel on YouTube additionally streams outtakes from this film: other strong performances by Walter Brown, Sam Chatmon, Clyde Maxwell, Jack Owens, Joe Savage, Bud Spires, Napoleon Strickland, and Othar Turner. Turner is also in Gravel Springs Fife and Drum on Folkstreams.
Alan Lomax's book by the same title won the 1993 National Book Critics Award for nonfiction.

No one has come close to Alan Lomax in illuminating the intersecting musical roots of an extraordinary range of cultures, including our own.
--- Nat Hentoff

Ash Ra Tempel, Kluster, Klaus Schulze, Tangerine Dream and many more musicians met and played together in The Zodiak Free Arts Lab. The club was initiated by Conrad Schnitzler (1937-2011). He was a prominent experimental musician who had before coming to Berlin studied sculpture with Joseph Beuys in Düsseldorf. The Zodiak became as he intented a scene wheremusicians, artists could improvise with psychedelic rock, experimental jazz and electronics. The stage had equipment and were used freely by the performers. There were two halls, one black and the other white. In this milieu visions met and expanded into new music that would arise. The Zodiak Free Arts Lab was short lived, between 1968-69, and still made a huge influence on music and art.
Posted by James Barrett at 11:53 AM No comments: Links to this post

"Science is an endless conversation about the world" - Armand Leroi

In the 4th century BC the Greek philosopher Aristotle traveled to Lesvos, an island in the Aegean teeming, then as now, with wildlife. His fascination with what he found there, and his painstaking study of it, led to the birth of a new science - biology. Professor Armand Leroi follows in Aristotle's footsteps to discover the creatures, places and ideas that inspired the philosopher in his pioneering work.

Aristotle's History of Animals can be downloaded here.
Posted by James Barrett at 6:44 AM No comments: Links to this post

Released jointly with a book the size of London itself! Punk In London is perhaps the best documentary as regards capturing the spirit of the bands who were at the forefront of the punk explosion in Britain circa 1976. Though footage of The Clash is tagged on to the end, to presumably give the makers a selling point, it's with the other notable movers of the times that Punk In London becomes something of an essential viewing for fans and interested observers alike.

Featuring live work from the likes of The Lurkers, X-Ray Spex, Subway Sect, Chelsea and The Adverts, this is a must see to really grasp just how raw the movement was before it became a viable product for record company big wigs. Though not all the live footage is of great quality (you will struggle to hear Poly Styrene's vocals on Identity), watching Howard Wall of The Lurkers sing whilst being surrounded by fans is critical in portraying just how of the people the punk explosion was, it really shows the whole essence and point of punk rock, namely anyone can make a record, get up there and do it yourself. Ultimately it's with the interviews that this documentary succeeds, watch and enjoy as Gene October (lead singer of Chelsea) muses on why his band exists, and delight as Arturo Bassick of The Lurkers does an interview at his parents house whilst Mam & Dad watch Top Of The Pops, featuring a performance from The Boomtown Rats singing Looking After Number One, Arturo's words at this point is crucial to how so many bands felt at the time.

Also features performances from The Electric Chairs, The Killjoys and The Jolt.
Posted by James Barrett at 8:31 AM No comments: Links to this post