Just as relevant now as then, if not more so! From the lost archives of avant garde artist, industrial music pioneer, mind explorer and TOPY-founder Genesis P. Orridge, who expresses concerns @ 20 years ago about state oppression on freedoms of individual thought and action, particularly through art.

The english entrepreneur and network-builder interviewed on his 1976 court case in which, as an artist, he was threatened to become a "non-representative person" and set under arrest by the UK-government.

This rarely edited 1986 version is part of the lost archives of Genesis P. Orridge who's message from then is even more actual in times of the msm propaganda and the internet.

Probably no part of this raw footage has ever been screened on the UK's national television.
Posted by James Barrett at 7:13 PM No comments: Links to this post


Sonic Outlaws, a fragmented, gleefully anarchic documentary by Craig Baldwin, approaches this incident from several directions. Some of the film is about the legal nightmare that ensued from Negativland's little joke. In a highly publicized case, U2's label, Island Records, charged Negativland with copyright and trademark infringement for appropriating the letter U and the number 2, even though U2 had in turn borrowed its name from the Central Intelligence Agency. SST then dropped Negativland, suppressed the record and demanded that the group pay legal fees. Trying to remain solvent, Negativland sent out a barrage of letters and legal documents that are now collected in "Fair Use", an exhaustive, weirdly fascinating scrapbook about the case.

Sonic Outlaws covers some of the same territory while also expanding upon the ideas behind Negativland's guerilla recording tactics. Guerilla is indeed the word, since these and other appropriation artists see themselves as engaged in real warfare, inundated by the commercial airwaves, infuriated by the propaganda content of much of what they hear and see, these artists strike back by rearranging contexts as irreverently as possible. Their technological capabilities are awesome enough to mean no sound or image is tamper-proof today.
Posted by James Barrett at 4:39 PM No comments: Links to this post

The is a documentary from, I think Colombian TV about the suburb of La Sierra in Medellin. Much of the program is made up of the amazing doumentary La Sierra by Scott Dalton and Margaita Martinez. Dolton and Martinez's film is one of the most incredible pieces of documentary film making I have seen. The Colombian TV program does not convey the pace and intensity that La Sierra has but it does have some good background information on those featured in the original film. It is in Spanish.
Posted by James Barrett at 10:56 AM No comments: Links to this post

John Fahey (February 28, 1939 – February 22, 2001) was an American fingerstyle guitarist and composer who pioneered the steel-string guitar as a solo instrument. His style has been greatly influential and has been described as American Primitive, a term borrowed from painting and referring mainly to the self-taught nature of his art. Fahey himself borrowed from the folk and blues traditions of America but incorporated classical, Brazilian, Indian and abstract music into his eclectic oeuvre. In 2003, he was ranked 35th in Rolling Stone's "The 100 Greatest Guitarists of All Time".
Posted by James Barrett at 6:25 AM No comments: Links to this post

Lubricated Goat: In The Raw

>
[The fraidy cats at Youtube have taken down the nude Blah Blah Blah In the Raw clip...so here is the official video from the Goat, still gives you the throaty thrill of Stu and the lads but without the knob shots]

When this In the Raw aired on Blah Blah Blah on ABC television in 1988 it caused a sensation. I remember seeing it in my student share house in Toowoomba and thinking, "wow punk actually exists in Australia." Later when I moved to Sydney in 1992 I lived around the corner from "Gracelands", the huge terrace house on Cleveland Street that housed Lubricated Goat. I remember walking around there from my place in Mort Street with a friend from Toowoomba and we stood on the other side of Cleveland just looking at it, like it was shrine or something. The whole scene around The Goat; Thug, Grong Grong, Salamander Jim, The Beasts of Bourbon, Kim Salmon and the Surrealists, The Scientists, Feedtime, Monroes Fur, Box the Jesuit, and so on was a high point in Australian music. Many of these bands are still going but the late 1980's and early 1990's was the high point for the scene. I will post some audio downloads from this glorious time on Friday Downstreams on Soulsphincter.
Posted by James Barrett at 4:02 PM No comments: Links to this post


Raw and homemade music video from the 6majik9 freakshow
Posted by James Barrett at 11:27 AM No comments: Links to this post

Kemialliset Ystävät in Barcelona, Spain. Sonar festival 2005. With visuals by Shary Boyle. Camera by Jordi.
Posted by James Barrett at 7:58 AM No comments: Links to this post


David Graeber is an anarchist and anthropologist. He is an associate professor of anthropology at Yale University, although Yale has controversially declined to rehire him, and his term there ended in June 2007. On June 15, 2007, Graeber accepted the offer of a senior lectureship in the anthropology department at Goldsmiths College, University of London. He will begin teaching there in September 2007
Posted by James Barrett at 7:15 AM No comments: Links to this post 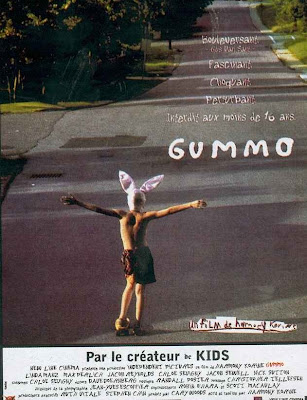 Gummo by Harmony Korine (1997). I had my first brush with this film tonight and it really does make an impression. It reminded me a lot of where I grew up and for that reason perhaps it disturbed me on one level. But then it is also a surrealist film, just too bizzare to take as complete realism. I know I have to watch it again (and maybe a few more times) before I can take it all in. Needing to do that is a sign it is a great film.

Posted by James Barrett at 10:56 PM No comments: Links to this post


Ira Cohen (born February 3, 1935) is an American poet, publisher, photographer and filmmaker born in New York City to deaf parents. During the 1960s, he traveled to Tangier, where he published the exorcism magazine GNAOUA. He also published The Hashish Cookbook under the name of Panama Rose. He continued to travel until 1980, when he returned to New York City, where he now resides.

....In his loft on the Lower East Side, Cohen created the "mylar images", future icons developed by a "mythographer". Among the reflected artists in his mirror: John McLaughlin, William Burroughs and Jimi Hendrix who said that looking at these photos was like looking through butterfly wings. Timothy Baum, noted expert in Man Ray, Marcel Duchamp, said that these images were jewels and should be shown at Tiffany's. With this shamanic and tantric exercise Cohen explored the whole spectrum of photography from infrared to black light. In 1968 he also directed the "phantasmaglorical" film Invasion of Thunderbolt Pagoda and produced Paradise Now, a film of the Living Theatre's historic American tour. Invasion Of Thunderbolt Pagoda was inspired by the films of Kenneth Anger and Sergei Parajanov and began as an extension of his photography work.

He went to the Himalayas in the '70s where he started the starstream poetry series under the Bardo Matrix imprint in Kathmandu, publishing the work of Charles Henri Ford, Gregory Corso, Paul Bowles and Angus Maclise; and developing his art of bookmaking, working with native craftsmen. In 1972 he spent a year in San Francisco reading and performing and then returned to New York mounting photographic shows.

During the 1980s Cohen made trips to Ethiopia, Japan, and back to India where he documented on video the great kumbh mela festival, the largest spiritual gathering on the planet. In the latter part of the decade Synergetic Press (London) published On Feet of Gold, a book of selected poems. He was also a contributing editor of Third Rail magazine, a review of international arts and literature based in Los Angeles.

Ira Cohen saw his poems published during the 1990s in England by Temple Press under the title Ratio 3: Media Shamans Along with Two Good Poet Friends, Gerard Malanga (Factory) and Angus Maclise. He had a show called Retrospectacle at the October Gallery in London and he also took part along with William Burroughs, Terry Wilson and Hakim Bey at a Here To Go Show in Dublin.
In 1994 Sub Rosa records released his first CD, The Majoon Traveller, with dj Cheb i Sabbah, which also included the work of Don Cherry and Ornette Coleman.
Posted by James Barrett at 10:08 PM No comments: Links to this post

Posted by James Barrett at 8:39 AM No comments: Links to this post

Winnie the Pooh on the Mekong


This film was made by Todd Graham! He is currently living in Canada,

Posted by James Barrett at 8:31 AM No comments: Links to this post