"Growing Up In America: Breathing Together, Revolution of the Electric Family"

The film begins with him reading from the "Moloch" section of "Howl", but then turns first to Jerry Rubin. The actual Ginsberg chapter (the film is episodic and arranged in chapters) comes on just about an hour in, and lasts for approximately ten minutes.

A brief transcription
AG: “But the problem is, I don’t think they’ve yet been hit by the ecological catastrophe that they have caused (the establishment, that is). ‘Because the whole point is that, karma, the old Indian word, meaning, like, cause and effect , you know - if you eat meat, you turn into.. a meat-eating.. piece of meat! - karma, cause and effect, is the same thing as ecology, in the sense that ecology is the inter-relation of cause and effect, of who eats what and what does what to who and the environment, so that the pollution of the environment that we’re beginning to notice now is the same thing as the pollution of our own moral consciousness, or the pollution of our own human feelings and emotions, the pollution of our own sensitivity, or the pollution of our own consciousness itself…and that it was consuming and shitting up the environment, all put together, making up a kind of matter habit. In other words, America, shooting a lot of gasoline, a lot of electricity, a lot of plastic, into its blood-stream, and dependent for maintenance of the large cities and the courts of justice, and the police, and television, and even the radical movement, dependent on shooting up all that matter - like matter-junkies. It puts the United States in a very weird karmaic position, or very weird ecological position, that, in order to maintain the present standard of living, and maintain the American way, we’re, literally, going to destroy the planet, (which will destroy the American way anyway).”
(Chanting of OM (the younger bearded Allen)

AH (the older Allen in suit and tie) )

“I must apologize for being mistaken in those days (that) I had the wrong mantra all along. My guru, Chogyam Trungpa, a Tibetan lama, had suggested I try a different one, more American, the same one you hear on July the 4th when the fireworks go up in the air which is…AH - which is appreciation of the spaciousness around us”.

“Chanting OM so aggressively didn’t intrigue people to enter that space (it probably just simply mystified them). I didn’t know enough then to send out a calmer vibe, a more thoughtful vibe, and a more sensitive vibe. I wish I’d been more sensitive then, and I wish I’d been kinder to myself actually, less outraged with myself, less guilty, carrying less white guilt, as everybody did, and trust, I wish I had trusted my instincts more freely as I do now, which were instincts of generosity rather than paranoia.”

(Allen at the harmonium singing from William Blake’s “The Grey Monk” and – OM)
soundtrack – “born in this world..” Gospel Noble Truths - footage from Allen’s window on New York's East 12th Street – followed by cut to him indoors, showing off some photographs:
“I had tea every morning almost a decade looking out of my kitchen window before I realized it was my world view August 18th 1984”

“William Burroughs, the Sphinx himself! at the Metropolitan Museum of Art, in New York, the Egyptian section, I saw Bill as a sphinx in a sense, you know. A sort of a great mind but a mysterious intelligence so I.. when we went to the museum, I pulled out my Kodak and snapped him standing by the stone face.”

“Jack Kerouac 1953 on the fire-escape of my apartment with a breakman’s rule book in his pocket, smoking a cigarette, the clothes lines behind him.”

“1964 Handsome Neal (Cassady) in good physique, and Timothy Leary, laughing, in the very psychedelic bus that Ken Kesey drove (with Cassady as driver) across the United States . They arrived in New York, met Kerouac, and then I got on the bus and we went to Millbrook. So this is the meeting between Neal Cassady and Timothy Leary at Millbrook in Ken Kesey’s psychedelic bus.”
“So my interest actually is in sacred moments of character and since the people I hang around with have some awareness of the possibility of a sacramental society, tho’ these may not be the supreme exemplars of such, they certainly are people who had some spirit that helped change the United States and widen the consciousness of the country, and waken up generations around the world – so that’s a revolution – some sense of an open-ness, some sense of camaraderie, and adhesiveness, as Walt Whitman said.”

On the other hand, there might be the skeptic – Burroughs! – skeptical of all that adhesiveness. He’s not quite sure, it’s 1961..”

“think what you think” “die when you die” Allen concludes (outdoor footage) singing from his own “Gospel Noble Truths”.
Posted by James Barrett at 12:18 AM No comments: Links to this post

A Conversation with Ingmar Bergman (1971)

listen); 14 July 1918 – 30 July 2007) was a Swedish director, writer and producer for film, stage and television. Described by Woody Allen as "probably the greatest film artist, all things considered, since the invention of the motion picture camera", he is recognized as one of the most accomplished and influential film directors of all time.

Posted by James Barrett at 10:11 AM No comments: Links to this post


You See Me Laughin' is a personal journey into the lives and music of the last of the hill country bluesmen who've kept their music alive on the back porches and in the tiny juke joints of the Mississippi backwoods.

In 1991, Matthew Johnson was an on-and-off college student who in his spare time wrote record reviews for Living Blues magazine. Johnson liked the raw, primitive sound of rural Mississippi blues, but was disappointed that so little of it was being committed to record; after discovering a juke joint in Holly Springs, MS, where proprietor Junior Kimbrough and his friend R.L. Burnside played raucous, electrified country blues til the break of dawn, Johnson decided the music should be committed to tape. Using 400 dollars left over from a student loan, Johnson started Fat Possum Records, and began recording deep Southern blues artists such as Kimbrough, Burnside, T-Model Ford, Cedell Davis, and Johnny Farmer while struggling to bring their music to a broader audience, pay their artists and keep the business afloat. You See Me Laughin' is a documentary which offers a look at Johnson and partner Bruce Watson's ongoing mission to capture this music before it's too late, and more importantly profiles the musicians who record for his label, exploring the wild and often violent lives that inform their work and fuel their often wary relationship with Johnson and Watson. Featuring rare live footage of Burnside and Kimbrough on-stage, You See Me Laughin' was the first feature film from director Mandy Stein. ~ Mark Deming, Rovi
Posted by James Barrett at 5:03 PM No comments: Links to this post

The Fall - The Wonderful And Frightening World Of Mark E. Smith


A 1-hour Documentary looking at the Manchester post-punk group and its infamous leader Mark E Smith. The Film follows the current band recording their final Session for the John Peel Show (they were his favourite group and recorded more sessions than any other band) as well as chronicling the chaotic history of the band & its numerous line-up changes. Featuring John Peel, Stewart Lee, Marc 'Lard' Riley alongside The Fall.
Posted by James Barrett at 9:01 AM No comments: Links to this post

"It's just a joke, life,” Sebastian explains. “It's a whole joke. And given that life is absurd, given that it's pointless, given that it's meaningless; to mirror it with an absurdist dance is in many ways taking up a real position. Dandyism is a ghost dance in the face of defeat.” He grins. “That's a good sentence.”

Posted by James Barrett at 9:50 PM No comments: Links to this post


Nostalghia (Russian: Ностальгия) is a 1983 Soviet film, directed by Andrei Tarkovsky and starring Oleg Yankovsky, Domiziana Giordano and Erland Josephson. The plot of the film centers around the meaning of the term nostalgia, which describes a longing for the past, often in idealized form. 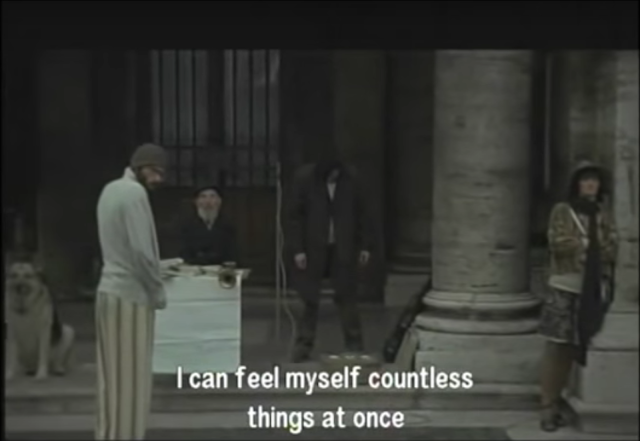 Posted by James Barrett at 2:21 PM No comments: Links to this post

Capitalism Is The Crisis


Capitalism Is The Crisis: Radical Politics in the Age of Austerity examines the ideological roots of the "austerity" agenda and proposes revolutionary paths out of the current crisis. The film features original interviews with Chris Hedges, Derrick Jensen, Michael Hardt, Peter Gelderloos, Leo Panitch, David McNally, Richard J.F. Day, Imre Szeman, Wayne Price, and many more! The 2008 "financial crisis" in the United States was a systemic fraud in which the wealthy finance capitalists stole trillions of public dollars. No one was jailed for this crime, the largest theft of public money in history. Instead, the rich forced working people across the globe to pay for their "crisis" through punitive "austerity" programs that gutted public services and repealed workers' rights. Austerity was named "Word of the Year" for 2010. This documentary explains the nature of capitalist crisis, visits the protests against austerity measures, and recommends revolutionary paths for the future. Special attention is devoted to the crisis in Greece, the 2010 G20 Summit protest in Toronto, Canada, and the remarkable surge of solidarity in Madison, Wisconsin.
Posted by James Barrett at 8:35 PM No comments: Links to this post


Brando on The Dick Cavett Show, June 12, 1973. With representatives of the Cheyenne, Pyramid Paiute and Lummi tribes.


Sacheen Littlefeather refusing to accept the Best Actor Oscar® on behalf of Marlon Brando for his performance in "The Godfather" - the 45th Annual Academy Awards® in 1973. Liv Ullmann and Roger Moore presented the award.
Posted by James Barrett at 8:46 PM No comments: Links to this post


À propos de Nice is a 1930 silent short documentary film directed by Jean Vigo and photographed by Boris Kaufman. The film depicts life in Nice, France by documenting the people in the city, their daily routines, a carnival and social inequalities. Vigo described the film in an address to the Groupement des Spectateurs d'Avant-Garde: "In this film, by showing certain basic aspects of a city, a way of life is put on trial... the last gasps of a society so lost in its escapism that it sickens you and makes you sympathetic to a revolutionary solution."
Posted by James Barrett at 10:35 PM No comments: Links to this post 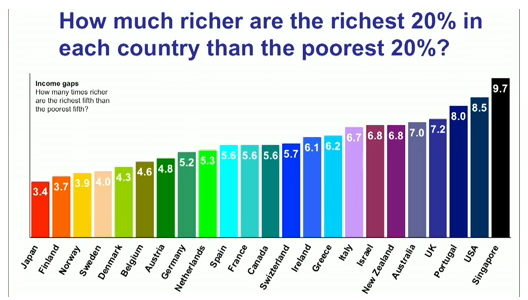 Posted by James Barrett at 4:37 PM No comments: Links to this post