On the 13 February 1945 at 10:00pm 800 bombers of the British RAF bomb the German city of Dresden. A firestorm ensued. Oxygen was sucked out of the air. The slaughter was indiscriminate. Men, women, children, babies burned by phosphor. 35,000 people were killed, at a time when the war was already lost by Germany. The war would end three months after the destruction of the city. This documentary traces the invention of aerial bombing as a weapon of war. From the bombing of Guernica on 26 April 1937 by the dreaded Condor Squadron, on loan from Nazi German to Franco to win the Spanish Civil War. From that point on one atrocity followed another. The culmination in World War Two was the bombing of Hamburg and Dresden by the British and United States air forces in World War Two and then the nuclear destruction of Hiroshima and Nagasaki by the USA. This film ends with VE Day.

The destruction is brutal beyond imagination and stomach churning to watch. On this day at this hour we should remember those millions who have died from the technologies of war, through no fault of their own and at the mercy of cruel and indiscriminate leaders. Those who flew the missions to deliver the bombs were often shocked to see the results of their work, as is expressed by the military survivors who took part in the raids in this film. Aerial bombing has rarely been found to be strategic from a military standpoint. A new survey on the use of aerial bombing during the Vietnam War has seemingly confirmed what many suspected: the massive and systematic bombing of South Vietnam detracted from, rather than furthered, U.S. war aims. The argument that the nuclear attacks on Japan shortened the war is not clearly established, and the attacks were rather a demonstration of destructive power by the USA was a statement to the USSR, which was about to launch attacks through Manchuria into the Korean peninsula when the war was about to end in the Pacific anyway.
Posted by James Barrett at 9:32 PM No comments: Links to this post


The center of Bangkok is covered by thousands of mysterious graffiti. Our man will stay 5 days in the capital of Thailand and try to find the creator of those baffling pieces.

Pichai Rattanapornchai is a 58 year old homeless man who has lived his entire life in Bangkok. For an unknown number of years he has created intricate map-like drawings in public spaces of the city.
Posted by James Barrett at 4:47 PM No comments: Links to this post

The Men of Fifth World

At first glance this documentary seems to be a non-Indigenous production, that recycles some of the myths held about the Indigenous people of Australia. However, it does touch on some good points and the cinema-photography is excellent.

The Men of the Fifth World is a documentary that shows us some of the history, culture and traditions of the Australian Aborigines. The old Garimala Yakar, tells firsthand how their world is accompanied by the sound of the didgeridoo, the beat of their tradition, which keeps them together and attached to the land. These tribes have had to defend their country from the impositions of the white man when he came to Australia for the first time. The aboriginal culture has faded over time but they never cease to tell their story to the youngest and keep the hope that someday find their truth.

In the Kakadu National Park lies Ubirrok, where the Rainbow Serpent stopped after creating the world and was painted on a rock so that people could see her. Over time our forefathers left on the rocks a complete collection of images which depict their way of life and their beliefs. On these ancient rocks they also drew figures of the men of that time, warriors and hunters, who used the same spears and harpoons as we do now.

We share our land with all types of animals, some of them as dangerous the kangaroo is the most characteristic animal of my country.

When we get together to dance around the fire, we sing the dreams of the animals, the stories of how they were created. Those that dance and sing paint their faces and bodies with kaolin, to look like the spirits which, according to our beliefs, are of a grey colour. The dance of the women is slower and more measured. They are normally in a state of trance, possessed by the spirits of the forest which protect them.

The didgeridoo It’s our sacred instrument. The men who know how to play it are very important in our culture. With the didgeridoo they communicate our wishes to the spirits. And they call on them to come to our aid when tragedy befalls us. This sacred instrument brings us closer to the world of our ancestors. It is difficult to play, because you have to blow constantly, using the technique of circular breathing.

The didgeridoos are made by the ants. Our land, here in northern Australia, is the kingdom of the ants.

Our people were nomads, always moving from one place to another, carrying their few belongings with them. That is why we know the forest so well. In the forest, we know how to get everything we need. The men have always hunted and fished, while our women are expert gatherers. They know where to find edible fruits and roots, and how to get honey. The women have always worked in the forest, carrying out these tasks. No one knows nature like they do. Their work is very dangerous. They often come across the king brown, one of the most poisonous snakes in the world, its bite is always fatal.

Hunting and war have always been men’s work, and they have always made their own weapons. Without a doubt, the boomerang is the best known of these. They are pieces of wood carved with a slight curve, which makes them more accurate when they are thrown. In fact, the spear is our best weapon. We used them in our fight against the white men who invaded our country and drove us off the land that belonged to us. Our spears claim other victims. When the tide goes out, we fish for the dangerous sting rays. These are manta rays that hide in the sand, ready to plunge their enormous stings into anyone who dares disturb them.

Our coasts are full of animals, which traditionally provided us with food. When we have speared an animal, we throw a buoy into the water, with a long rope tied to harpoon. Whenever they catch a giant turtle, the fishermen arrange a feast, right there on the beach, to which all their relatives are invited.

“My people have always felt the need to express themselves through painting, now and since the beginning of time. Our art, now called aboriginal art by the white man’s tourist industry, is born from the dreams of each artist and the intense colours we see in our land.

Near the city of Darwin, my people call to the spirit of the king of the crocodiles with piercing cries.
It is a dance of invocation. It is performed whenever someone has to travel to an area where the powerful sea crocodiles live. They ask for its permission and protection, but the great spirit is always asleep, and so they have to cry out to wake him, so that he knows that people have gathered together to dance in his honour.

Posted by James Barrett at 4:17 PM No comments: Links to this post


When I was 16 Stop Making Sense came out. I had been a Talking Heads fan since I was 14 and had first heard Swamp (Thanks to Risky Business and the VHS rental store my friend's parents ran). I went to see Stop Making Sense at the local cinema in Toowoomba, a rural capital in Australia. I was the only person in the entire Strand theatre. I sat alone in a huge old theatre and was blown away. 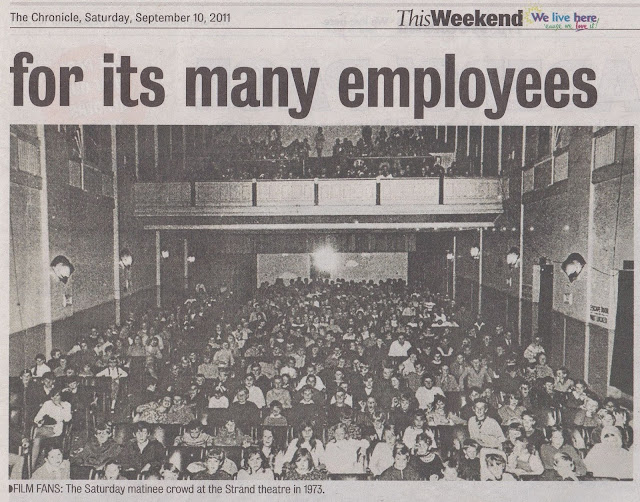 Posted by James Barrett at 6:28 PM No comments: Links to this post


Sophie Scholl – The Final Days (German: Sophie Scholl – Die letzten Tage) is a 2005 German historical drama film directed by Marc Rothemund and written by Fred Breinersdorfer. It is about the last days in the life of Sophie Scholl, a 21-year-old member of the anti-Nazi non-violent student resistance group the White Rose, part of the German Resistance movement. She was found guilty of high treason by the People’s Court and executed the same day, 22 February 1943.

The film was presented at the 55th Berlin International Film Festival in February 2005 and won Silver Bear awards for Best Director and Best Actress (Julia Jentsch). It was nominated for an Academy Award for Best Foreign Language Film.

Posted by James Barrett at 9:15 AM No comments: Links to this post